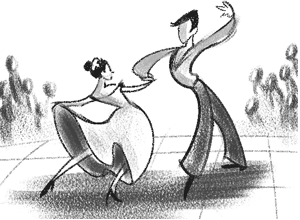 The origin of the Spanish-styled Paso Doble dance represents a bullfight, where the lead takes the role of the bullfighter, while the follow takes on the flare of the red cape of the toreador and not the bull, as often assumed. Together, the lead and follow move dramatically, often changing roles as they move around the imaginary bull, while they present flamenco elements and feature arena fights with stylized figures.

Its present form was created in France and since 1959 it has been one of the five dances of the Latin American program of international ballroom competition. In terms of its usefulness in your dance development, it is probably the best dance for your development of a strong and stylistic frame, one of the great challenges beyond learning your footwork.

Our Dance Syllabus
Scroll to top